The Ajax Youth Academy in Amsterdam world famous youth academy, or in Holland better know as Ajax De Toekomst Academy or De Toekomst, which translates to ‘the future academy’, has very few competitors when it comes to producing world-class footballers. Located outside the Amsterdam Arena, the Ajax FC has a state of the art training facility with 7 full sized pitches. With a massive budget of 4.5 million euros, the Ajax Academy has an impressive 240 youth players which are divided into 7 different teams ranging from the seven-year-old age group, up to the under 19’s. Even more impressive is the fact that Ajax has 7 youth teams playing in a number of national leagues in Holland.

Most of the players in the academy are recruited via the Ajax scouting network, where scouts often travel around Holland, South America, and Africa, looking for the best young talent available. The only other way to join youth development at Ajax Academy in Amsterdam, apart from being scouted, is through the annually hosted 3-day ‘talent week’. During these 3 days, over 1,000 children and teenagers attend this event, putting their footballing abilities to the test through a number of drills and tests. Edgar Davids (retired), and Rafael Van Der Vaart (Real Madrid) are among the few who made their mark at this event and eventually graduated to the first team. 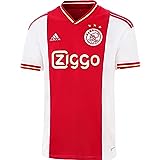 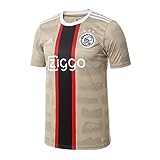 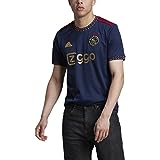 One could imagine the style of play from the young footballers is probably something mindblowing. Remember, the ones that usually go through the AJAX Academy turn out to be the best in dutch football and always go on to do big things throughout Europe.

What is even more interesting is the fact that every youth team within the academy are trained in exactly the same way (except for physical/fitness training) as the Ajax first team, hence making the players accustomed to the core playing style, and making it easier to adapt when they make it to the first team. The same 4-3-3 formation and ‘total football’ style of play have been central to the club’s success over the last 20-30 years, where creativity, technique, and speed are an absolute necessity. Ajax has developed this philosophy that has been used to develop the current T.I.P.S model, which stands for technique, insight, personality, and speed, with each one of these attributes, are considered vital for the development of a trainee. Perhaps this is why a graduate Ajax player of the Ajax Amsterdam youth academy are rated as among the best when it comes to technique, balls skills, and creativity.

Other competing youth academies such as the FC Barcelona’s Barça Academy, have recently caught up with the standards of the Ajax youth academy, but still, have some catching up to do when it comes to comparing the number of world class players that have been produced. To prove this, we have compiled a short list of some of the top players who have come through the ranks of the famous Ajax academy:

That has got to be one of the most impressive lists of players, even more so considering that every player had come through the same youth academy and are now considered some of the greatest players of all after gaining fame and fortune around Europe.

Please let us know if we missed out on any notable player on the list via the comments section. It is also worth noting that Ajax (AFC Ajax) has currently got a scouting network in South Africa through its Ajax Cape Town Club, where players such as Steven Pienaar and Aaron Mokoena made their way to Amsterdam, hence further expanding their reach outside Europe and proving without a doubt that AFC Ajax is a youth development powerhouse turning out youth teams that have produced some of the best young players the beautiful game has ever seen!

Finally, we have the video from youtube below showing the 1995 UEFA Champions League Final which was won by Ajax Amsterdam, with a team that included no less than nine homegrown youth academy graduates leading Amsterdam to lift the cup and show just how dominate the Ajax Academy had become.

Is AFC Ajax the best academy?

Which football club has the best academy in the world?

Barcelona Currently, La Masia is the world’s best soccer youth school. From 2024 onwards the original club was worth $709 million.

What is Ajax youth academy called?

Ajax Youth Academy (Dutch: JUGEDOPPERING AJAX) is an international football academy that operates from its headquarters at Amsterdam, Netherlands. The academy is the most comprehensive youth clinic for footballers Ajax Amsterdam.